The Arbore People, whose primary religion is Islam, are from the Omotic language family. They live in Southern Ethiopia, south west of the Omo Valley. Konso is the lingua franca in this area. They have ancestral and cultural links to the Konso people and perform many ritual dances while singing. The Tsemay people are also their neighboring tribe. Arbore people are pastoralists (livestock farmers). They believe that their singing and dancing eliminates negative energy and with the negative energy gone, the tribe will prosper. 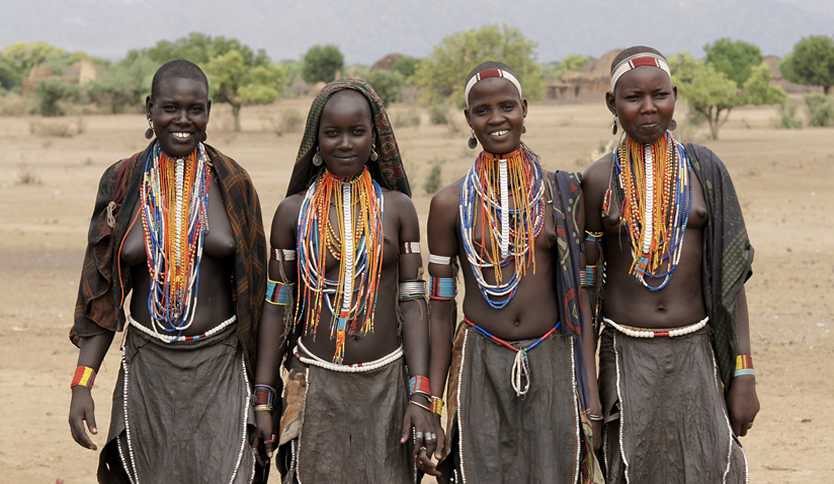 In the space of a few square miles, there are four large Arbore villages, Jellifa, Egudi, Gula'ma and Gondara'ba, the last being their main center and the residence of their paramount chief. Arbore is said to be the name of the first ancestor of the Arbore Girl tribe. The Arbore claim that they have always lived in their present territory. Together with the Burji, and the Konso, the Arbore speak Cushitic languages. The Arbore are very active traders and spread into distant areas.

They exchange cattle for agricultural products from the Amare Kokke and aquire worked iron from the Kerre and Borana. The Arbore build their huts slightly oval in shape. The Arbore have a bodily mutilation of raised dots on the chest and abdomen. The Arbore believe in a Supreme Being creator and father of men whom they call Waq.
The women of the tribe cover their heads with a black cloth and are known to wear very colorful necklaces and earrings. Young children will wear a shell type hat that protects their heads from the sun. Body painting is done by the Arbore using natural colors made from soil and stone. Traditional dancing is practiced by the tribe and wealth is measured by the number of cattle a tribesman owns. Arbore is one of Ethiopia Cultural Tour in Omo Valley.