The Hamer people are usually identified with their periodic ceremony. It is known as the ‘bull jumping’ or ‘maz’. It marks the initiation of the young men in to the adult hood. The ceremony involves a running leap on the backs of many bulls that must be repeated at least four times. It is in this ceremony that the fate of a young Hamer man is determined whether he is capable for the social jump from youth to adulthood and for the responsibilities of marriage and rising for a family. 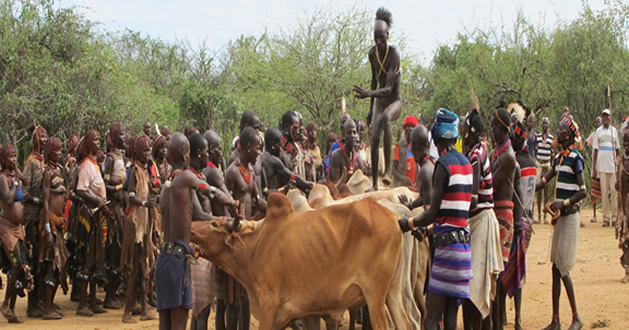 The whipping of the young female and her relatives accompany the ceremony of ‘bull jumping’. This is done to show the ability of whipping girl to endure pain on behalf of the man she loves. The more numerous and extensive the scars, the deeper the girls devotion to him who is about become a man after the bull jumping ceremony. There is also a ritual of coffee drinking ceremony, the maz, which is considered as a blessing.

Besides the ceremony of the maz, greater attention has given to hair styling and decoration by the Hamer people. It is said that hair styling enhances beauty and signifies status, bravery and courage. For instance, the men who have killed either an enemy or big and dangerous animals wear clay hair bans into which ostrich feathers are inserted. Women tend to wear their hair in short tufts rolled in ochre and fat or in long twisted strands.