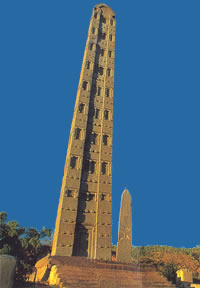 Axum, Ethiopia's most ancient city, and capital of one of the most glorious empires of the past, is one of the most illustrious links in the Historic Route. The 10th century BC Axumite kingdom was at one time considered together with Persia, China and Rome as one of the great powers of the world. It was an important commercial centre, trading with Egypt, Greece, Rome, India, Arabia and Persia. Axum began to decline in the seventh century AD. The Axum landscape is marked with mysterious monuments and magnificent ancient structures and ruins. The oldest and most esteemed of the treasures are the 3,000-year-old age steles that were sculpted from single pieces of granite rock curved to resemble storied buildings. The tallest obelisk, which is over 23 m tall, was looted from Ethiopia and erected in Rome by Mussolini's fascist troops during their brief occupation of the country from 1936 to 1941. After decades of debate and controversy, the monolith was finally returned to Axum in April 2005. The relic is now Ethiopia's greatest historic attraction.

At the churches and monasteries of Axum, history comes to life as the icons and historic crowns of ancient emperors tell the story. The most outstanding church is the 16th century Cathedral of St. Mary of Zion, considered to be Ethiopia's holiest site and believed to house the original Ark of the Covenant.

While in Axum, other historical sites not to be missed are: the royal graves of King Kaleb and Gabre Meskel, the 54 room ruins of a palace that supposedly housed the Queen of Sheba, and her legendary Bath. Also look out for the still legible early 4th century stone-pillar inscription, made on account of King Ezana's victory over rebellious tribes.